Maspalomas - a place in transition

Maspalomas is the name given to the entire southern tip of Gran Canaria:

It's where the beach is particularly beautiful and the world-famous dunes welcome astonished visitors.

Once planned as a pure tourist resort in 1961, a multicultural metropolis has developed over the decades. Over time, the town of Maspalomas has grown out of the merging of several villages. These have become city quarters now.

The districts of San Agustín, Bahía Feliz and Playa del Inglés are located directly on the seaside. The beaches dominate the life of locals and tourists.

Many Europeans are living next to the hotels now, as locals and spaniards from mainland are doing. Many of them once came as tourists and have stayed forever. They live in their own flats, bungalows and villas, either permanently or as second homes.

San Fernando and El Tablero are predominantly inhabited by locals, many of them are  working in tourism. People from Africa, Asia and Latin America also characterise these neighbourhoods and enrich them with exotic shops and restaurants. There is honest, down-to-earth gastronomy, as well as shops and markets with prices without tourist mark-ups.

The San Fernando farmers' market, which takes place on every second Sunday, has become an institution. Here you can find regional products in organic quality at unbeatable prices.

The younger districts of Campo de Golf and Sonnenland are characterised by detached houses, bungalows and extensive green spaces.

This is also the administrative centre of Maspalomas with the town hall, several authorities, police headquarters, the local court and a health centre ("Centro de Salud").

Visible from afar at night is the ferris wheel that turns in the "Holiday World" amusement park.

The youngest district is Meloneras. It is protected from the dunes by the lagoon and the original oasis with its ancient forrest of date palms.
It was not until the beginning of this millennium that companies like RIU or Lopesan built large hotel complexes of the latest generation in Meloneras. Architectural sins of the 20th century were avoided.

Although Meloneras is considered the centre of all-inclusive tourism on Gran Canaria, a cosmopolitan, upscale gastronomy has nevertheless established. Clubs, bars and cafés on the promenade exude international flair.

It is a challenge to describe life in Maspalomas in all its diversity. A comparison helps here: Maspalomas is somewhat between Rio de Janeiro and San Francisco, together with its fantastic subtropical climate.


Speaking of climate! In fact, there are only three seasons here: Carnival, Gay Pride and the time between. 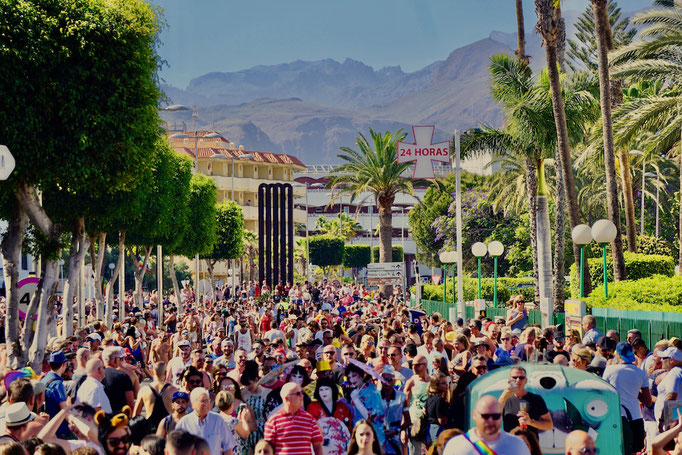 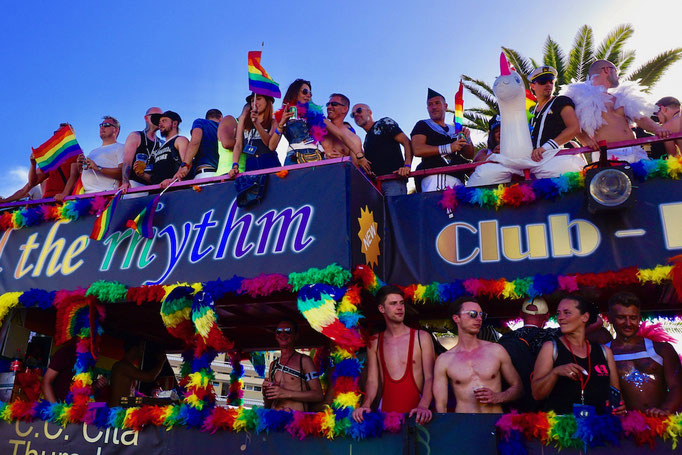 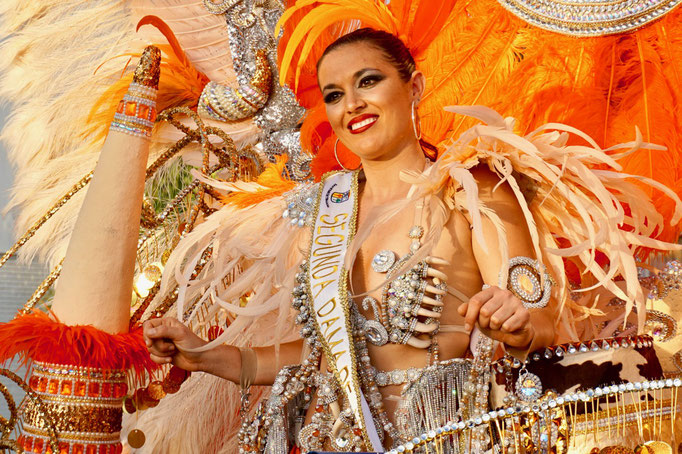 It is not only life that is celebrated here. Maspalomas is also the setting for numerous cultural and sporting events, such as the Maspalomas Marathon or the Spanish beach volleyball championship.

Nearby, the World Windsurfing Championships are held every summer.

Nowhere better than on the long sandy beach between San Agustín and the Maspalomas lighthouse the locals and tourists can be observed. A beach culture has developed here like the Brazilian way of life.

Everyone is equal on the sand: young or old, naked or styled, homo or hetero, sporty or cosy.

It doesn't matter who you are or what you look like; everyone is allowed to be who she or he wants to be.

That is what Maspalomas is all about. And because you can find everything else you need to live here, Maspalomas is not only lovable but also worth living.

Instead of many words: this clip conveys the versatility of the island.

Do you still have any question?